Last year, we had the pleasure of seeing Skid Row Marathon three times!

We first discovered this inspiring film at the Palm Springs Film Festival in January. From there, we were fortunate to bring the film to our 9th Annual Windrider Film Forum in June. And finally, we had the opportunity to partner with UNAFF for their screening of the film in October (read about our partnership here). 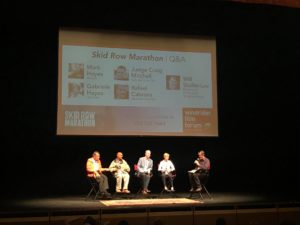 For those of you who have seen the film (and for those who have not yet), we have some exciting updates for you on the film and filmmakers!

Recently, our Windrider Social Media and Content Manager, Christina Bullock, sat down with the filmmaker and producer, Gabi Hayes, to discuss the latest. 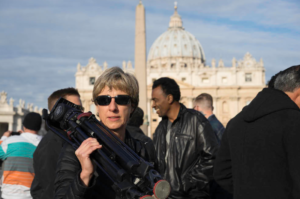 Christina Bullock (CB): Hi Gabi! Thank you for taking the time to speak with me today.

Gabi Hayes (GH): It is my pleasure, Christina. We had such a positive experience at Windrider last year and love the community and support you have given us. Yes, I’d be happy to share what’s been going on with Skid Row Marathon.

CB: Great! Let’s get started. Since the Windrider screening back in June, where has the film been shown?

GH: We’ve been very busy! Over the past year, we’ve had numerous screenings at other film festivals and private events. We’ve also been working hard on a few upcoming weeklong releases! 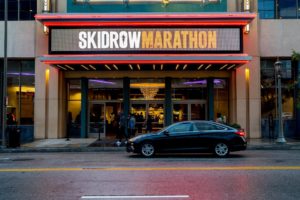 In just a few weeks, we’re gearing up for a weeklong theater screening in Austin, right before the Austin Marathon on February 8-9th.

We’re also going to be showing the film in LA on March 22nd-28th at the Laemmle Theater in Pasadena. It’ll be right before the LA marathon on March 24th  and we’ll be having a Q&A on the 23rd. We should have a really nice turn out from the running club since it’s so close!

Then in May, we will be showing the film at Stanford University on May 30th. 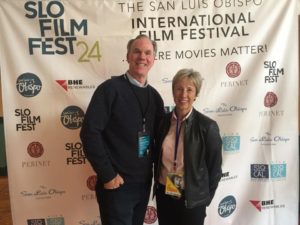 Later this spring, we’ll be doing another release in Europe in Germany, France, Norway, and Sweden. We’re thrilled!

CB: Wow, that’s amazing! You’ve got quite a busy schedule! Will the film ever be released for in-home streaming?

GH: Yes, we plan to have it available for streaming on iTunes in late spring.

CB: So cool! I’d love to see the film again, and I’m sure many from our Windrider community will as well. And for those who did not have the chance, this will be perfect! We will be sure to let everyone know when the film becomes available on iTunes!

CB: Now a question I think a lot of people are curious about. How are the individuals in the film doing?

GB: Really great! Since the film was made, Rebecca moved to Seattle and is a surgical technician. She has a nice home there and has continued to run marathons on her own. She even went to Barcelona for one! She has a new boyfriend and her son is growing up nicely. She is very happy and has really turned her life around! 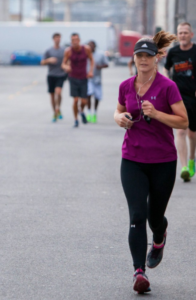 David, the painter, has a job in downtown LA working in a homeless facility. He has had a few snags here and there and hasn’t been running as much due to some knee problems. We’ve kind of lost contact with him since he’s only been to the running club a few times over the past year. 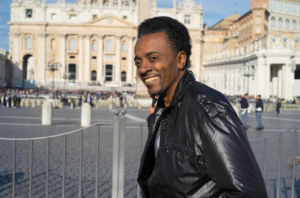 Ben has been busy working on assignments to write music for short films. He also works for Street Symphony, a non-profit on Skid Row that organizes people on the streets to play music with professional musicians and helps them to get back on track. Ben is no longer with his girlfriend as seen in the film, but has a new, sweet wife who works in PR. They currently live in Hollywood but are considering moving to Tahoe. 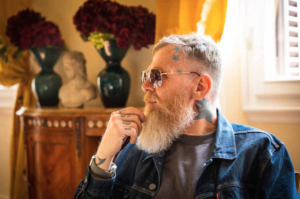 Rafael is doing very well! He has been working for LA Waterpower & Cultural Affairs. He has been very active with our film screenings and Q&A’s. We see Rafael quite often. He has since gained 20 lbs. and does not run with the club very often. 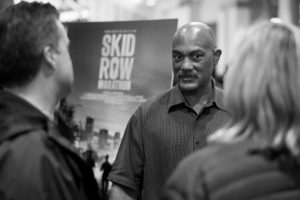 Mody was working in Santa Monica in a restaurant until ICE came and found out he was illegal, so he no longer works there. He, unfortunately, had a relapse and has since moved back to Senegal. He seems to be happy to be back with his family after 30 years of living on Skid Row and is trying to get a new life started. Our goal is to try to see him there someday! 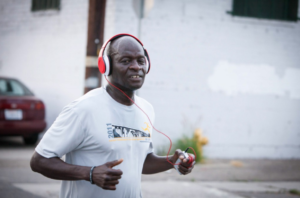 CB: Wow, thanks for all of this. It’s so nice hearing what they’ve been up to and that they’re doing well.

GH: Yes, I enjoy seeing them and still run with the club once a week or so. Mark and I also have fun getting together with them for birthday and other events. 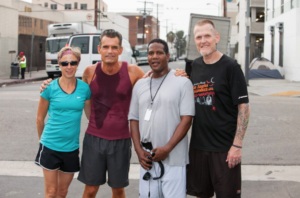 CB: That’s great that you’re still so close and that you continue to run with them! If someone were to be interested in giving back to the Skid Row Running Club, how would they do so?

GH: That would be wonderful! So far, the film has raised over $100,000 for the running club. This has helped to buy running shoes, fund their trips to marathons around the world and help them turn their lives around. If someone wants to donate, they can do so by going onto our website here (Click here).

Aside from monetary donations, we even had 50 pairs of Skechers donated to the club. Here are some pictures of the members running in them! 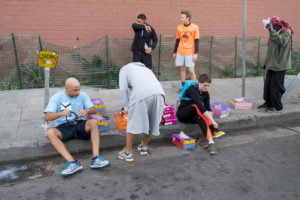 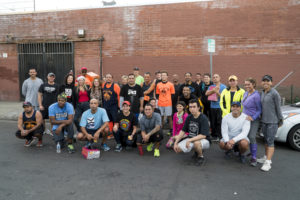 CB: Wow, that’s amazing the film has generated so much support and thanks for sharing the photos! So what’s next for the Skid Row Running Club?

GH: Thanks, we’re all so grateful for the continued support. The club has continued to grow, and now we have between 40-50 members! In addition to traveling to Ghana and Rome as seen in the film, the club traveled to Jerusalem last year and they’re planning a trip to the Galapagos Islands this year! 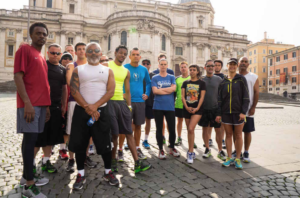 CB: How fun! Thank you so much for your time, Gabi. It’s been so nice hearing what the club has been up to and the exciting things happening with your film. We wish you all the best!

To learn more and stay in touch with Skid Row Marathon, visit their website here and their social media Facebook page here.